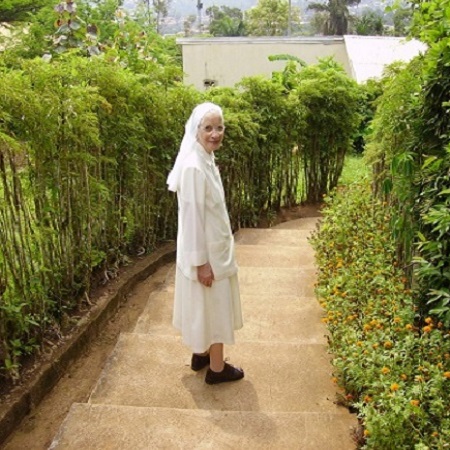 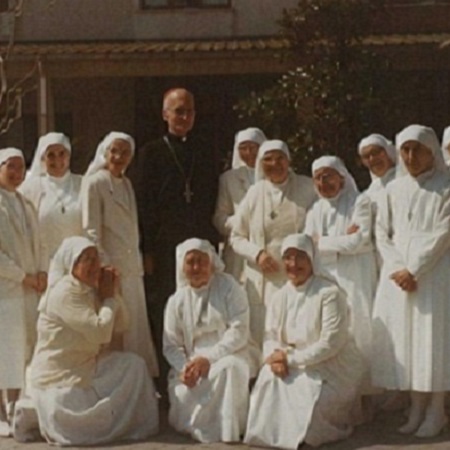 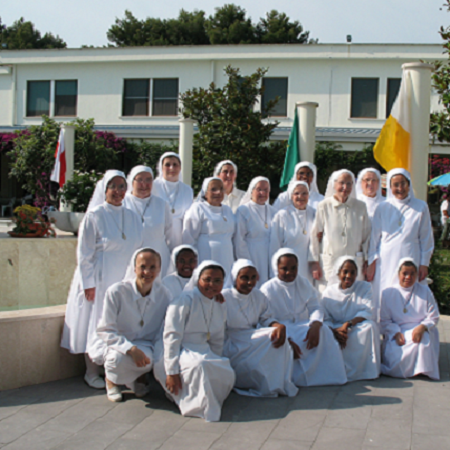 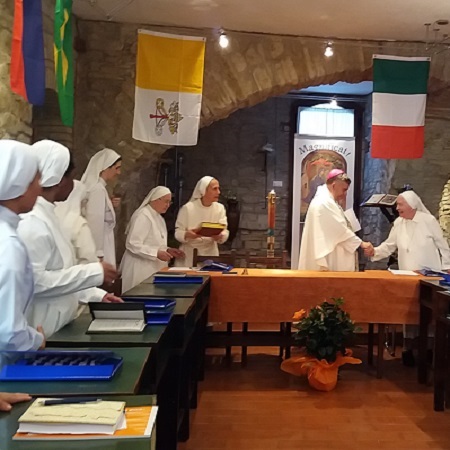 The Servants of the Visitation consecrate themselves totally to God, who from all eternity has loved them with a love of predilection.
They embrace and live the evangelical counsels of poverty, chastity and obedience, inspired by Mary in the mystery of the Visitation: Servant of the Lord, bearer of grace and joy in the Holy Spirit.
They commit themselves like Mary in the Visitation, harmoniously blending active and contemplative life.
They commit themselves only, with their lives, to bear witness and to make the mystery of the Visitation shine in the Church, with the intention of making present in the world what happened at Ain Karim in the meeting of the two Mothers: a true explosion of salvation, of jubilation, of praise to the Lord: Magnificat!
The Holy Father John Paul II, in his Encyclical “Redemptoris Mater” of March 25, 1987, proposes to the whole Church the example of Mary: “Blessed for her faith”, totally devoted to the praise of God and in joyful service to the “poorest”, in simplicity of heart (cf. R.M.3).

Their “cradle” was the Benedictine Monastery of St. Joseph in Assisi on April 16, 1978.
June 29, 1978: H.E. Monsignor Dino Tomassini, Erige the group, in Pia Unione Ancelle della Visitazione.
On 13 July 1978: opening of the first community in Rome, Via Germanico 146, working apostolically in the hospitals: Policlinico Umberto I, Oftalmico, New Regina Margherita, S. Giovanni Battista à Magliana.
August 20, 1978: His Excellency Msgr. Agostino Mayer, blesses the chapel in Via Germanico 146 offered by His Excellency Msgr. Fiorenzo Angelini. The first community at Via Germanico.
September 11, 1978: The community moves from the Monastery of St. Joseph to Villa S. Tecla, in Palazzo di Assisi, the summer residence of the seminarians.
July 30, 1980: Bishop Dino Tomassini dies of a heart attack; he will remain, for the religious family, the “Good Father”.
February 2, 1981: His Eminence Rev. Ugo Poletti, Vicar of Pope John Paul II, issues the Decree of heresy of the Pious Union in the Congregation of Diocesan Right Sister Servant of the Visitation, in the diocese of Rome.
On March 30, 1981: His Eminence Most Rev. Ugo Poletti presides over the Celebration in which he erects the Pious Union and delivers to each Servant the new constitutions, in the Chapel of St. Francesca Romana.
On June 1, 1981: the community moved from Palazzo di Assisi, to S. Marinella (Rome), which became the Mother House of the Institute; a house of spiritual and cultural formation for young women who aspire to religious life and a house of welcome for the elderly.
June 29, 1983: opening of the first Overseas House, in Oristano. Family House for people of the third age.
January 15, 1985: opening of the Hermitage of St. Mary in the Visitation, in Mora di Assisi. House of prayer of the Institute.
February 2, 1986: opening of the first house in Brazil, in Itaquaquecetuba, on the outskirts of S. Paolo. After a few years, the house moved to “Vila Acalanto”, in Guarapiranga, also on the outskirts of S. Paolo.
June 26, 1986: the Community of Rome moves from Via Germanico to Via Giorgio Baglivi, 9. Generalate and legal headquarters of the Institute.
April 9, 1988: Opening of the house in Manila, followed by the opening of the mission in Borongan, on the island of Samar, on June 1, 1988.
May 31, 1988: Blessing of the Shrine to “Santa Maria della Visitazione” by His Eminence Cardinal Ugo Poletti; followed by the Consecration of the same Shrine, on August 13 of the same year at the close of the Marian Year, by H.E. Monsignor Diego Bona, Ordinary of the place.
May 31, 1988: the Lay Association “Custode della Visitazione” is born, with a Decree of S.E. Monsignor Diego Bona.
June 12, 1991: solicited by H.E. Monsignor Rocco Taluccio, two Sisters go to Lagonegro, in the Rest Home L. Cosentino, to offer their directional service.
September 8, 1993: presence of a small community in Fontecchio (Aq) at the Opera S. Maria della Pace.
September 8, 1993: presence of a small community in Bolechowice – Krakovia.
October 7, 1993: “in itinere”, a close apostolic relationship is begun with the Bishop of Ambanja in Madagascar. A sister offers, in the propaedeutic seminary of Nosy- be, lessons in philosophy to young people.
July 2, 1995: Work begins in the nursery school at S. Matteo della Decima (BO).
March 4, 1996: Some Sisters went to work in the “Casa di Riposo Maria Consolatrice” in Maratea (Potenza).
May 31, 1997: It was inaugurated and blessed by the Bishop His Exc. Mgr. L. Medroso, inaugurated and blessed another building, “AIN KARIM” in Borongan (Philippines).
July 2, 1997: opening of the mission in Madagascar, Nosy-be, in the Diocese of Ambanja.
September 1, 1997: a sister of the Community of S. Matteo della Decima, at the urging of the Parish Priest, collaborates with the teachers of the Kindergarten of Dosso, a few kilometers from S. Matteo.
On September 8, 1999: the day of the Nativity of the Virgin Mary, the Congregation received Pontifical recognition, for which, in addition to the juridical fact, the theological, spiritual and apostolic reality of the institute itself was enhanced.
In the Jubilee year of 2000, the community of Nosy-be was transferred to the village of Mahitsy, about 40 km from the capital Antananarivo.
July 15, 2005: the first stone of the building destined for the community of Bevalala was blessed.
October 7, 2002: the Servants of the Visitation began a new missionary presence in Kenya, in Ol Moran.
June 29, 2007: the formation house in Nairobi, currently the International Novitiate, was officially opened.
In January 2007: the first two sisters arrived in Cameroon, where the construction of the congregation’s mission in the village of Evodoula, in the diocese of Obala, had already begun. Nine years later, on October 7, 2016, the community of Kribi, also in Cameroon, was opened. 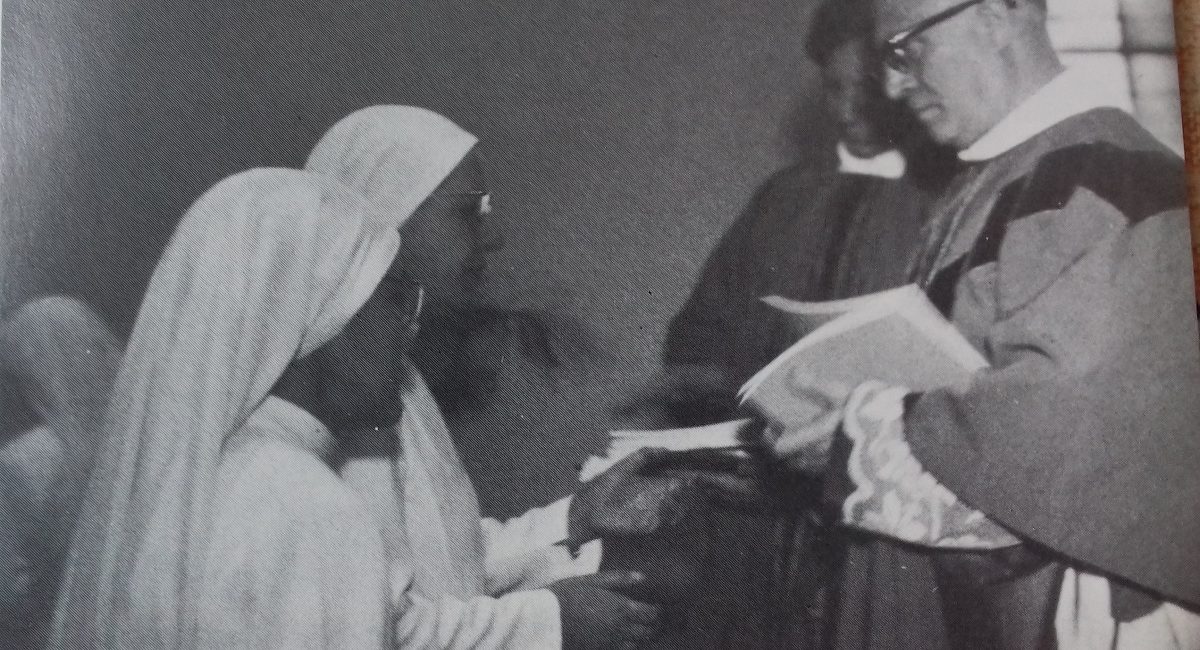 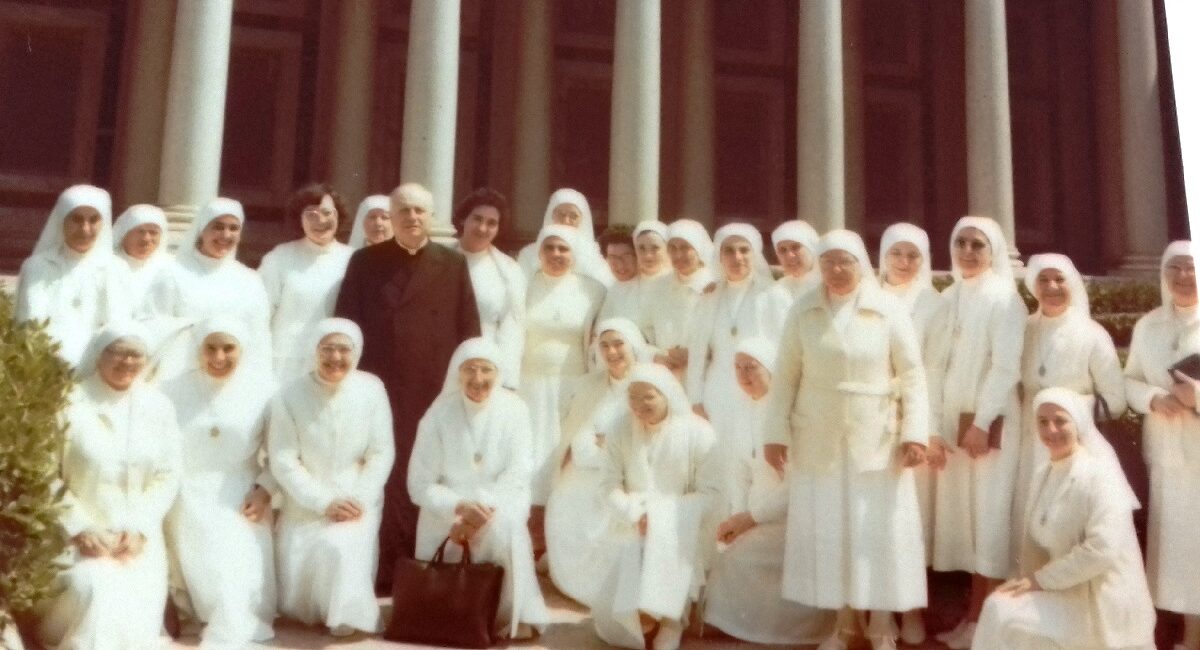 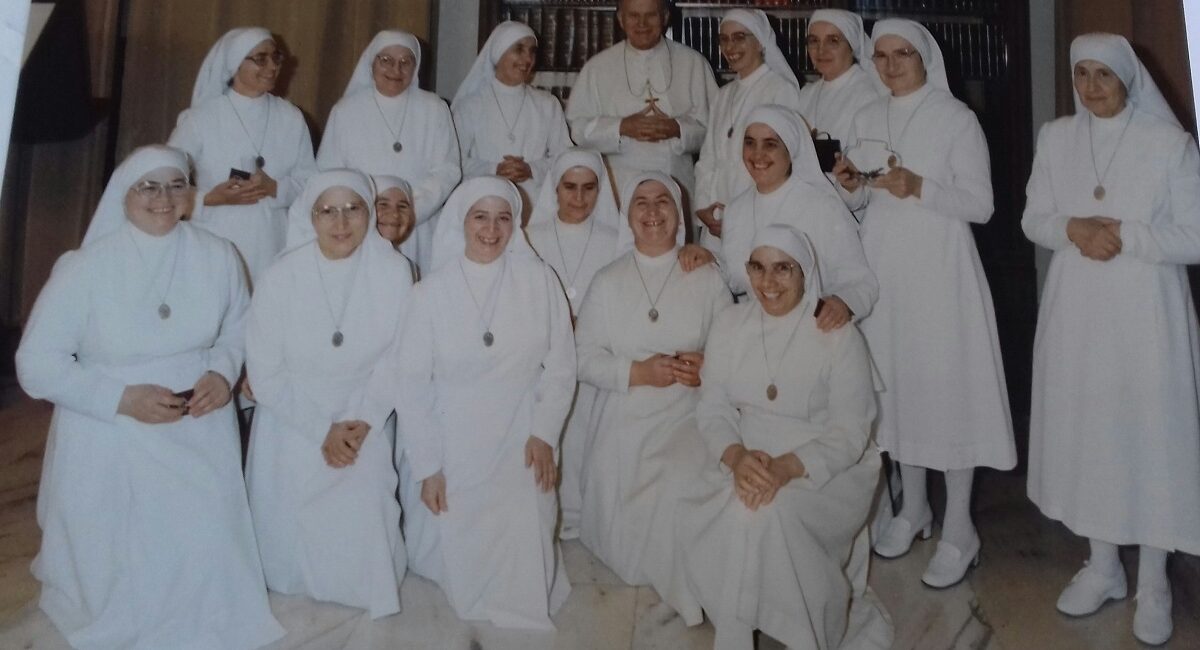 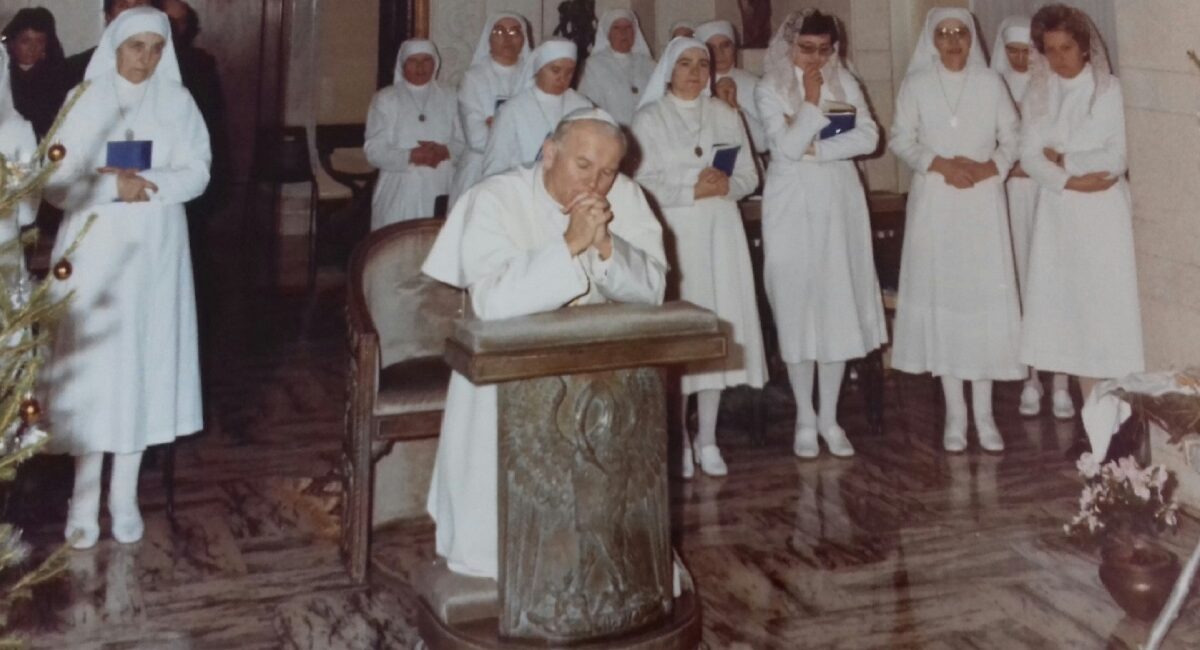 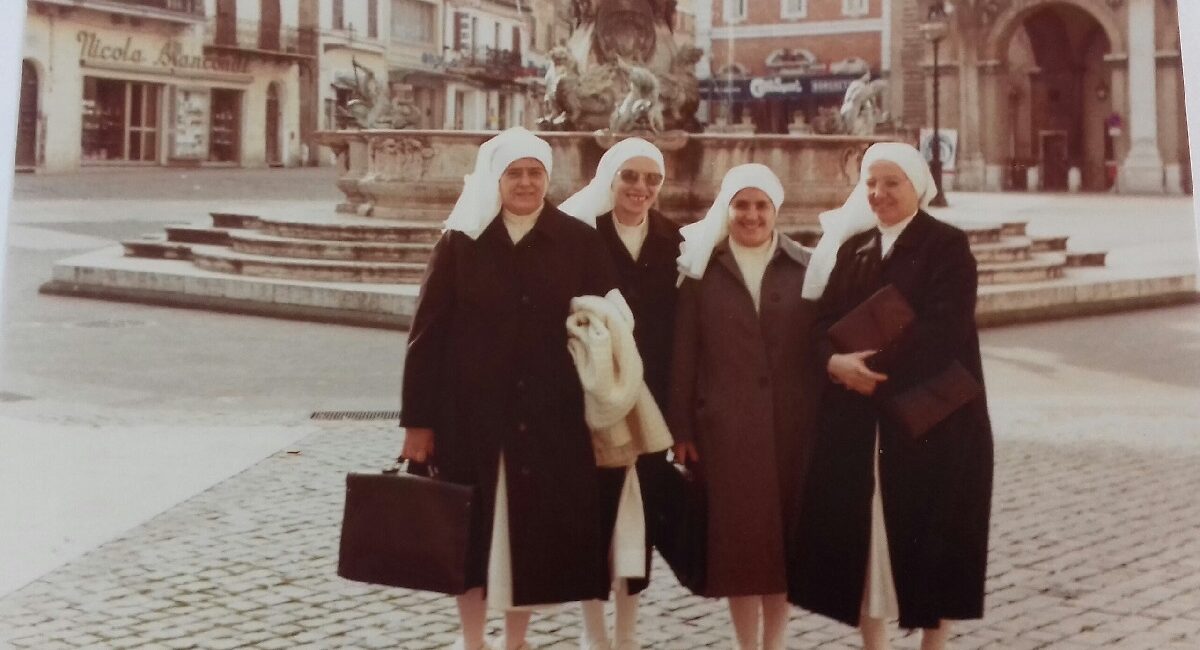