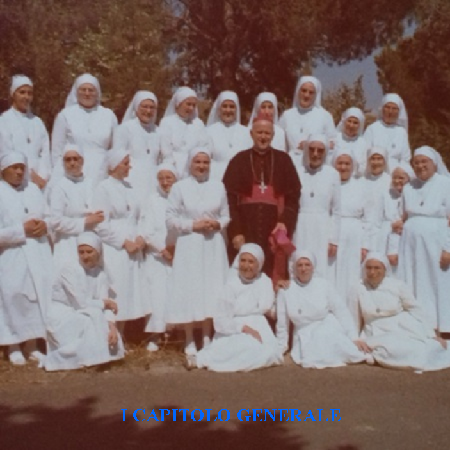 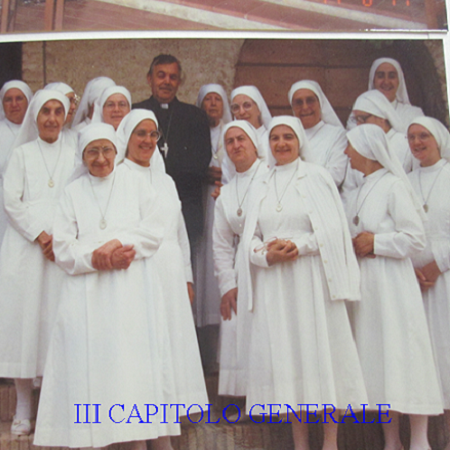 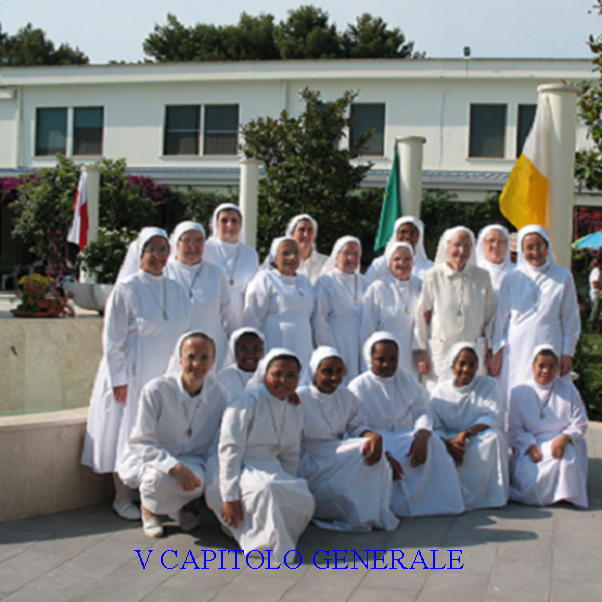 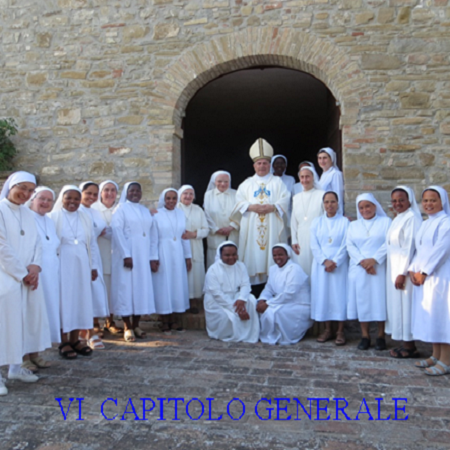 The First General Chapter was celebrated in SANTA MARINELLA from August 8 to September 10, 1984: “the Mother of the Visitation, whom we have chosen as our guide and example, always proposes her faith to us as a gift… She, our Mother, never approaches others without arousing a creation charged with the joy of the Lord’s presence and of His wonders. Let us never forget that Mary is the one who stands at the beginning of every exultation, she is the one who consecrated every exultation.”
For the founding group of the Servants of the Visitation, it was about thirty spiritually intense days, during which they compared, in the light of the Gospel and their Constitutions, in fraternal dialogue, their consecrated and apostolic life.
As foreseen by the Constitutions, for the election of the Government of the Congregation, they had among them the paternal and wise presence of H.E. Mons. Andrea Pangrazio, Ordinary of the place. From the election, the Government of the Institute was formed as follows:

At the conclusion of the Chapter, the Lord willed that His Most Reverend Eminence Cardinal Ugo Poletti be among them. Ugo Poletti. It was a moment of special “grace” with which the good Lord covered their young Congregation.
Words of encouragement, profound esteem, and support for the future were a “caress” of benevolence that the Lord wanted to bestow on us!

The Second General Chapter was held in ASSISI from August 30 to September 14, 1990.
The Servants of the Visitation in number of sixteen, participants to the II General Chapter, gathered at the Hermitage S. Maria nella Visitazione in MORA DI ASSISI, to begin this important moment of the Spirit with prayer. With the Eucharistic Celebration of the Bishop His Exc. Rev. Monsignor Diego Bona, the Spiritual Exercises began, during which, the reflections had as predominant theme “the Virgin Mary, Mother, Model, Icon of the Church”.
On September 13, 1990, the day of the election of the new Government of the Institute, this important act was preceded by the Eucharistic Celebration, presided over by the local Bishop, Monsignor Sergio Goretti. In the Hall, after the invocation of the Holy Spirit, the election of the MAJOR SISTER of the Institute was carried out by secret ballot. To humanity, the “fate” fell on the Senior Sister who already twelve years had fulfilled this task:

From the acts of the II General Chapter it appears that: the Chapter members, in the meeting of September 14, 1990, feast of the Exaltation of the Holy Cross, recognized, in the light of historical events, that the “FOUNDRESS” of the Religious Family of the “ANCELLE DELLA VISITATION” is Sister M. VINCENZA MINET.
To her God has entrusted the Charism and the task of grasping the “needs” in the journey within the Church and for the Church.
Bishop Dino Tomassini, Ordinary of the Place in Assisi in 1978, was the “Father” who welcomed them into the Church as “Servants of the Visitation”, recognizing their Charism. He guarded them and nourished them spiritually so that, in the hard trial, their steps would not falter.

The III General Chapter was held in ASSISI from August 8 to September 15, 1996.
On the afternoon of August 31, all the Chapter members, eighteen in number, were present to begin the course of spiritual exercises which would then introduce them to the Chapter. The exercises were dictated, with spirituality and vital experience, by Father Carlo Morandin, Benedictine of the Sacro Speco in Subiaco.
On the day on which the Church commemorates the Nativity of the Virgin Mary on September 8, after the Eucharistic Celebration, the Sisters made their way in procession to the Chapter Hall, carrying the Word of God and the Paschal Candle on high, intending to base their review of life and their choices on the Word of the Lord and comforted by the presence of the Risen Lord.
The work was very intense, also because the days planned were few, but the effort was fruitful. The Sisters said that the atmosphere was one of serenity, mutual trust, open and serene dialogue through which they always found themselves in full agreement. This was a true gift from God.
In the presence of the Ordinary of the place, H.E.R.ma Monsignor Sergio Goretti, on September 12, the election of the Government of the Congregation took place. It was confirmed, with indispensable “Nulla Osta” from the Congregation of the Religious, being the IV sexennium,

On the occasion of this Chapter, it was established that Sr. Vincenza, as Foundress, should, from that moment on, be called Mother.

The IV General Chapter was held in ACERNO from September 2 to 27, 2002.
It was an immense joy and enrichment to be together with twenty-one Sisters coming from various countries where we work apostolically: to listen with lively interest to different experiences, difficulties, joys, sorrows, privations, sufferings. To rejoice together in the great good that the Lord gives us to be able to offer to so many brothers and sisters in need, not only of bread but also of spiritual food, love and understanding, for which they are so eager…
The General Chapter began on September 2 with a course of spiritual exercises dictated to us by Bishop Mario Salerno, who accompanied us in a paternal way during those holy days and also during the Chapter.
On September 12, at the conclusion of the Eucharistic Celebration, we went in procession, carrying the Word of God and the Paschal Candle, to the Chapter Hall where, after the singing of the Veni Creator, the Chapter was declared open.
The Chapter Assemblies took place in an orderly and serene manner, following the ITER previously prepared.
On September 16, a vote was taken for the new General Government:

On September 27, the Chapter concluded with a solemn Eucharistic celebration in the Chapel of the Village “San Francesco Santa Croce”, at the end of which Monsignor Mario Salerno read the message of the Supreme Pontiff John Paul II, today a Saint.

The V General Chapter was held in ACERNO from June 2 to 19, 2008.
Sisters from the communities present on the various continents took part as members by right and as delegates. For the religious Family, the Chapter is an event of great grace and, at the same time, a meeting of intense fraternity for an exchange of apostolic experiences and community life.
In preparation for the work of the Chapter, the Sisters participated, from June 2 to 9, in a course of spiritual exercises led by His Excellency Archbishop Piergiorgio Silvano Nesti, who proposed the meditation and updating of the Apostolic Exhortation “Sacramentum Caritatis”.
On the morning of June 11, the singing of “Veni Creator” opened the V General Chapter of the “Servants of the Visitation” and Mother Vincenza lit the Paschal candle signifying the presence of Christ.
A report – meditation of Mother Vicenta on the theme of the chapter “GOD IS LOVE” provided the spiritual and concrete content for the work of discernment and deepening of the following days.
The V General Chapter will forever remain a “historical chapter” in their Congregation, since during it the first Superior General,

Sister Dorina Stefani, was elected after the Mother Foundress.

The V Chapter concluded on June 19, 2008.
A significant aspect of this V General Chapter was the participation, competent and wise, of Mother Jolanta Olech, as Visitor on behalf of the Congregation for Institutes of Consecrated Life and Societies of Apostolic Life.
In the month of September 2015, the first Extraordinary General Assembly took place in Mora di Assisi, at the Hermitage “S. Maria della Visitazione”. The guiding theme of the assembly work was: “With the impetus of Mary, we walk towards humanity, to bring Jesus: the joy of Salvation”.

On Sunday evening, June 4, 2017, 20 Sisters from different continents left for the VI General Chapter that took place in ASSISI from June 5 to 25, 2017.
It was preceded by a week of spiritual exercises, June 5-11 led by Fr. Alberto Valentini, a religious of the Company of Mary (Montfort).
The theme was “In the school of Mary, to be authentic witnesses of the joy of the Gospel.”
On June 22, a vote was taken for the new General Government, which resulted as follows:

To crown the VI General Chapter, all the capitulars participated in the general audience on Wednesday, June 28. To their great surprise they were asked to take a photo together with Pope Francis and this allowed them to greet him and exchange a few words with him, which was a great encouragement.
The last official act, at the conclusion of the Chapter, was the “taking of service” by the Sisters elected as members of the new Government of the Institute. This took place on June 29, during the Holy Mass of thanksgiving for the thirty-nine years of foundation. Each of them made a solemn promise to serve the Institute and the Church according to the Gospel and the Constitutions.